Inmates in Alarming Conditions in Iran Prisons Amid COVID-19 Pandemic: "we can't even buy disinfectants"

Iran Prisons, Prisoners Situation, COVID19
Share this
Free disinfectant products are not available to prisoners; except the monthly ration of a few litres of bleach for cleaning the ward toilets and showers 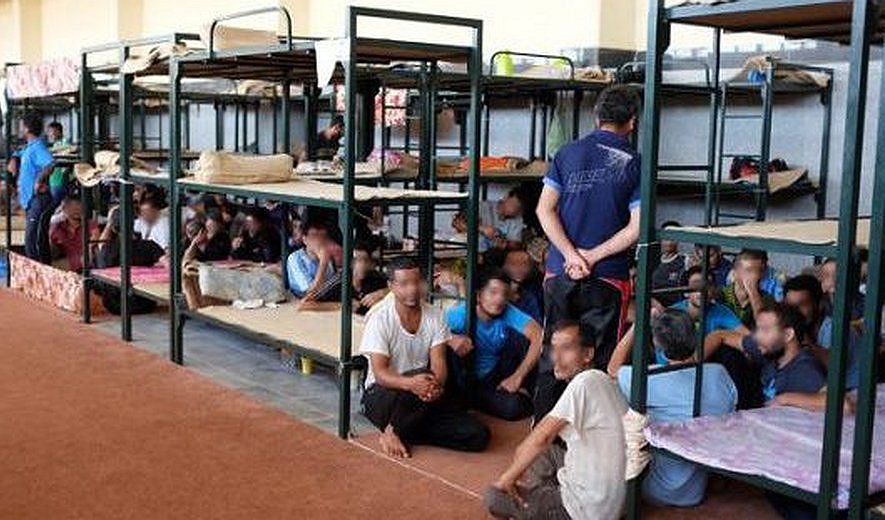 Iran Human Rights (IHR); July 31, 2020: Prisoners in many prisons do not have access to disinfectant products and masks. Overcrowding, malnutrition, and the sick and the elderly who are considered high risk to COVID-19, mixed with other prisoners, have all exacerbated the situation. Yet, the authorities continue to lie and cover-up. Iran Human Rights once again calls on the World Health Organization and other international organizations to pay attention to the situation of prisoners in Iran during the COVID-19 pandemic and to take action to protect the lives of prisoners in Iran.

According to Iran Human Rights, the situation of numerous prisons in Iran is alarming. In most prisons, disinfectant products are not available to prisoners, even to buy.

Officials from the Prisons Organisation had previously claimed that "disinfectant products are free in prisons, prisoners’ temperatures are taken regularly, and "conjugal rooms" have been turned into quarantine rooms, and corona patients are transferred to university hospitals.”

A prisoner in Rajai Shahr Prison in Karaj told Iran Human Rights: "Free disinfectant products are not available to prisoners; except the monthly ration of a few litres of bleach for cleaning the ward toilets and showers. We also have to buy masks from the commissary, if they haven’t run out. Several guards have caught corona here but the statistics are still the same. They stopped all prison visits including conjugal visits but the guards still enter the cells to do headcounts and that’s how the virus is transmitted. They’ve set up a few iso boxes in the prison grounds where they quarantine people suspected of having corona. They’ve closed all the halls off and movement is extremely restricted. Several prisoners in Ward 1 in Hall 3 contracted corona and they quarantined the entire hall.”

The source added, "On Wednesday, a number of doctors sent by the Prisons Organisation came to test inmates, and they took prisoners’ temperatures and took photos of several political prisoners as they were testing them. Most prisoners refused to take the test after they started taking photos. So they put their cameras away and continued to take people’s temperatures. According to the infirmary, over the last few days, 12 people from Ward 7, Hall 20 have tested positive and 8 people from Wards 3, 1, 6, and 10 also have it. 8 of the guards have also caught it, including the health supervisor. Ward 7, Hall 20 where 12 people recently got coronavirus, is the psych ward, where people are on psychiatric drugs and the hygiene and diet situation is dire.”

“Two people from the political hall also got corona,” the source continued, “one was Iraj Hatami, who was furloughed and the other, Majid Assadi who they kept in a quarantined room until he recovered.”

A prisoner from the Greater Tehran Penitentiary (Fashafuyeh) said: "Six prisoners lost their lives in the second wave of coronavirus at Fashafuyeh. Five people have tested positive in the 5th brigade over the last few days. The 5th brigade is where political prisoners and recently arrested protesters are kept. They don’t give us disinfectant products or masks here. A few months ago, they came and said if anyone wants to buy disinfectant products at their own expense, write down their names. So we wrote our names down but they didn’t even give us that. They’ve closed the cultural unit at Fashafuyeh and turned it into quarantine quarters. Anyone entering the prison, meaning they’ve returned from furlough or even be it a new inmate, has to be quarantined there for 14 days before entering the wards.”

Another prisoner from Urmia Central Prison told IHR: "Prisoners are not given any disinfectant products. Many prisoners have corona and many have died. Corona has spread through all the wards in Urmia Prison and contact between the halls has been cut off. I don’t have exact figures on the death toll, but apparently more than 15 people have died. Although the judiciary gave orders for prisoners to be furloughed, it gave power to the provinces to grant them. Nobody was furloughed from Urmia Prison, especially those with narcotics convictions, no matter how light the sentences are, it doesn’t matter to them. They don’t furlough narcotics convicts in Urmia.”

Amnesty International published a revealing report on the negligence and cover-ups by officials in relation to COVID-19 in Iran’s prisons. According to the report, eight people have died due to the Coronavirus in Urmia Central Prison. Amnesty published four leaked official letters signed by officials at Iran’s Prisons Organisation sent to the Ministry of Health, “raising the alarm over serious shortages of protective equipment, disinfectant products, and essential medical devices.” However, the Ministry of Health does not appear to have responded to any of these letters.